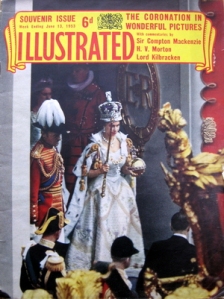 There have been 38 coronations in England since William the Conqueror of Normandy was first crowned at Westminster on Christmas day, 1066. Today marks the 60th anniversary of the coronation of Queen Elizabeth the Second in 1953 following the sadly premature death of her father, King George VI.

On 13th June, 1953, Illustrated Magazine produced a special souvenir edition for the Coronation (a “Coronation Record Number”) to provide, in the words of the editorial, “a full pictorial record of the epic day on which the Queen dedicated herself to the service of God and of her peoples” in the hope that it would “perpetuate for you and your children the memory of June 2, 1953”.

This special edition featured contributions from authors including Sir Compton Mackenzie – “Words from the Heart” – and HV Morton – “A Queen’s Glory Outshines All” – the text of which was transcribed by Kenneth Fields on 2nd June 2011 and can be read in full here: http://www.hvmorton.co.uk/hvmsoc/LN99-101.html#LN100.

“My seat in Westminster Abbey gave me a perfect view of the objects I wished to see: the Coronation Chair, the Throne, the Chair of Estate and the Royal Box behind it. Nothing else mattered. It was upon that floodlit space before the High Altar, covered with a golden carpet, that the Queen would be anointed and crowned.” 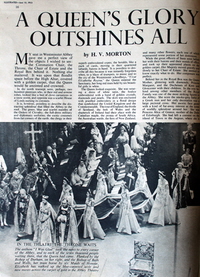 With hints of the central portion of “In Search of London” from two years earlier, and its detailed description of the history and origins of Westminster Abbey, Morton takes us in a broad sweep from the Plantagenets, through St. Edward the Confessor and Henry III, to the present day. With his love of the linguistic, he points out that the ancient word for “Coronation” was the “hallowing, or the making holy, of the monarch”. As the piece continues, he harks back to the Coronation of this new Queen’s father, on 12 May 1937 which he also witnessed, and reported on for the Daily Herald.

The Coronation is, at heart, a communion service and Morton acknowledges this in the closing paragraph of his carefully crafted article as he notes simply:

“Kneeling side by side, the Queen and the Duke of Edinburgh took Holy Communion. Then, to a great pealing of bells and the sound of cheering, with the music playing and the trumpets blowing, Queen Elizabeth II went out from her hallowing, the Crown upon her head and the sceptres in her hands.”

Measuring 13.5 by 10 inches, the magazine is an evocative time capsule, capturing the feelings and aspirations of the time, both in the reverential tone of the articles and in the multitude of advertisements it features. Everything from rainwear, Ovaltine, bicycles and Bird’s Custard is promoted with a respctful Coronation theme. 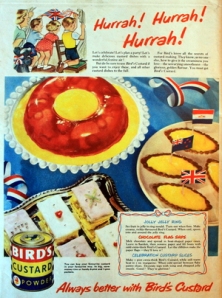 There is even a small advert for “Cuxsome, Gerrard & Co. ltd, Carnation Corn Pads” – for people suffering after standing for hours in the crowds perhaps – and for “glorious” Agfacolour film – just incase anyone was less than satisfied with mere black and white for this special occasion. My favourite is this full colour cartoon from the brewers of Double Diamond beer. Their well known slogan “A Double Diamond works wonders” is wonderfully borne out as a patriotic gentleman is elevated above the cheering crowds atop a teetering tower of beer bottles. 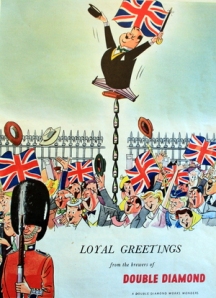 Other slogans in this edition have fared less well with the vagiaries of time and an evolving language. One wonders just when it dawned on Mars, the manufacturers of Spangles boiled sweets, that the, then innocent and charming, phrase “Spangles, the sweet way to go gay” had finally run its course and become a less than effective means of enticing children to part with precious pocket-money!

The editorial, with justifiable pride, makes considerable mention of the many photographers who contributed to this important edition. The highlight however, (apart from possibly the cover photograph) surely has to be this central photograph, the first one ever published of the coronation in colour, taken by James Jarche who also contributed many photographs to Morton’s books and articles over the years. 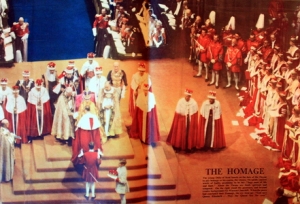 This sought-after and delightful magazine is well worth keeping a look out for. It is occasionally seen on the web pages of second-hand book sellers for reasonable cost and would make an important addition to anyone’s collection of Mortoniana.