(This was originally posted to HV Morton members as HVM Society Snippets – No. 145)

In February this year, in King’s Lynn, Norfolk; Florence Green died peacefully at the age of 110. A modest woman, she had worked much of her life at a local hotel and during her spare time was heavily involved with the British Legion – knitting clothes, blankets and toys for children. Before her marriage at the age of nineteen, she had also served as a mess steward in the Women’s Royal Air Force and, with her passing, the world lost its last living link with those people who served in the forces during the First World War.

Remembrance day is approaching. A commemoration of the day when, after more than four years of continuous warfare and roughly 20 million dead, the guns fell silent across the battlefields of Europe and the World on the 11th hour of the 11th day of the 11th month in the year 1918.

The hope at the time was that this had been the war to end all wars. Surely, after such madness, the carnage would never be repeated? We know now this was in vain, and, little more than two decades following the signing of the armistice at Compiègne in France, the conflagration ignited again. It seems the urge to warfare may simply be part of the human condition.

Twenty-six years after the excerpt below, in his 1951 book “In Search of London”, HV Morton, in somber mood, described post-Second-World-War London as a city “of jagged ruins and hatless crowds”. The bare heads of its populace were symbolic of a people who were, “graver and sadder”  than before – people, Morton wrote, whose courage had been “expended in many years of air warfare… the air raid wardens, the fire watchers, the firemen”. Knowing how the hopes for peace in the years following the Great War had been so thoroughly dashed, Morton briefly considered the possibility of yet another, third world war in the new atomic age.

The following contemplation of the Cenotaph in London is from Morton’s “The Heart of London” and was written only six years after the last shot of the First World War was fired:

The wind comes down Whitehall and pulls the flags, exposing a little more of their red, white, and blue, as if invisible fingers were playing with them. The plinth is vacant. The constant changing trickle of a crowd that later in the day will stand here for a few moments has not arrived. There is no one here.

No one? I look, but not with my eyes, and I see that the Empire is here: England, Canada, Australia, New Zealand, South Africa, India… here — springing in glory from our London soil.

In a dream I see those old mad days ten years ago. How the wind fingers the flags…

I remember how, only a few weeks ago, as a train thundered through France, a woman sitting opposite to me in the dining car said, ‘The English!’ I looked through the window over the green fields, and saw row on row, sharply white against the green, rising with the hill and dropping again into the hollows — keeping a firm line as they had been taught to do — a battalion on its last parade.

The Cenotaph and no one there? That can never be. 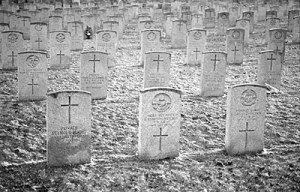 HV Morton Society members who would like to, can read Morton’s 1927 account of a pilgrimage of 700 mothers of the fallen to the Menin Gate at Ypres in Belgium in the on-line archive.

For an explanation of the connection between the Cenotaph in Whitehall and the grave of the unknown soldier in Westminster Abbey, have a look at the British Legion website.