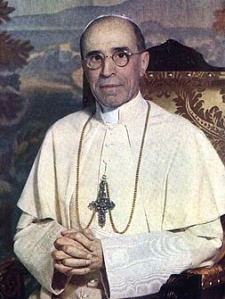 I am just reading HVM’s book “A Traveller in Rome” – AGAIN, and with much pleasure – and am interested in his views on Pope Pius XII which are very positive. This pope was very much defamed after the war – quite wrongly, but Morton published this in 1957! Possibly “they” decided to have a go at the Pope after this date – for what  he was supposed to have not done during the war. As it happens he did a great deal but had to be quiet about it. I can’t imagine Hitler taking much notice of anything he had to say about the situation, he would simply have shut him up one way or another.

Bearing that in mind I have put together the short piece that follows. Really, surely this should go on TV  like Bradshaw’s journeys by Michael Portillo on the train round the country, which are very interesting – but HVM knocks spots off old Bradshaw!

I once started to write a travel book of my journey round the Middle East and some time later read HVM – frankly I threw my stuff in the bin. The amount of sheer hard work and research – before Ye Internet – combined with his wonderful writing skills and connections to people wherever he went is, to me, genius.

HV Morton, the celebrated travel writer, states in his book “A Traveller in Rome”, published in 1957:

“There probably has never been a Pope who is more certain to be canonised that Pope Pius XII and the stories I heard about him made me anxious to see a man who will one day be numbered among the saints”. 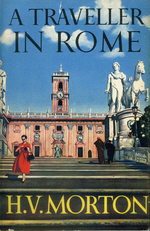 The cover of “A Traveller in Rome”

Morton obtained a ticket for an audience at Castel Gandolfo, the Pope’s summer home, among thousands of others. His holiness appeared on the balcony, seated on a red and gold chair, an elderly, frail white haired man, wearing gold rimmed spectacles and  “radiating holiness”.

“Even if I been unaware of his ascetic lifestyle and his saintliness,” HVM wrote, “I should have felt this. He is a thin aristocrat whose hands are of the thin and attenuated kind that El Greco loved to give to his saints. His face is slim and sallow, his eyes dark and deep set. He is so upright and precise in his movements that it is difficult to believe he is eighty years old.”.

HVM goes on to describe the Pope in more detail: He speaks eight languages, he says, and was the first Pope to have flown, to descend into a mine and to visit a submarine. In 1917 he carried to the Kaiser the offer of Benedict XV to mediate in the first World War. He knew Hitler before the last war and he was elected in 1939, on his birthday, when he was sixty three years old. An unfortunate time to become Pope indeed!

Morton does not comment on the Hitler connection which, of recent years, has been the cause of so much defamation of this Pope since, in 1957 – when “A Traveller in Rome” was published, the campaign to condemn Pius for not sorting Hitler out had not yet begun. At this audience the Pope gave a short speech and a blessing in several languages and clearly was hugely popular and much loved.

HVM later had a private audience with his holiness. It was a simple ceremony in which Morton received a blessing and, while down on one knee, found himself fascinated by the beautiful scarlet velvet papal shoes peeking out from beneath the hem of the Pope’s spotless white soutane. Again HVM states his belief that he was in the presence of a truly holy man, who led a frugal and ascetic life and who loved birds, keeping two pet canaries which he allowed to fly around his apartments in the Vatican.

With hindsight, looking back from the year 2014 at Morton’s pleasant and  fascinating account of his meeting with Pope Pius XII sixty years ago, it is relevant to mention the unjustified attacks this Pope has been subjected to since that time.

From around 1963 Pius XII has been accused of being a friend of Hitler and not speaking out against the Holocaust – this is not the place to discuss these accusations which, in any case, have already been strongly refuted. It is difficult to know what Hitler would have said or done had the Pope made a public denunciation of him anyway, but it is hardly likely that he would have taken any notice.

In the event Pius XII did much to help the Jews, as well as many other victims of the war, in a quiet and – of necessity – secret way for which he should be thanked instead of defamed. When HV Morton met his holiness in the 1950s, he perceived Pius XII as a man of goodness, holiness, courage, intelligence and concern for all. If negative and defamatory things were being said about the Pope in Rome at that time surely, as a writer who missed little in his travel books and researched his material thoroughly, HVM would have been aware of it.

Tagged as A Traveller in Rome, books, Literature, Travel