No, no, put those wallets away – despite what you might think from the title, this is not a request for charitable donations!

I recently came across this flyer, tucked inside a 1935 edition of HV Morton’s “In Search of Ireland“, which gives marvellous insight into just how widespread this author’s popularity was. 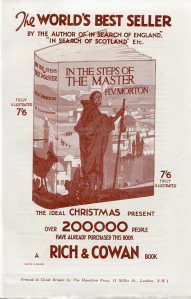 The front of this single sheet of paper is an advertisment for HVM’s best selling, “In the Steps of the Master“, published in October 1934, which it describes as “The World’s Best Seller” and suggests, at 7/6 (seven shillings and sixpence – that’s 37.5 pence in today’s currency), it would make the ideal Christmas present. It also features a retouched, monochrome reproduction of EA Cox’s original cover and informs us that already, only a few months after publication, it has sold a fifth of a million copies.

Interesting enough you would think, but it was the reverse of the flyer which really grabbed my attention.

On the face of it, just a mundane order form, telling readers where to send their postal orders to secure that festive gift; but on closer inspection there is a review of the book which is of particular interest:

This review of “In the Steps of the Master” is written in Maori!

Being nothing if not obsessive, I transcribed the text:

… But, unsurprisingly, it meant little to me. So I turned, in hope, to an online translation service, and discovered Google have recently included Maori in the list of languages it features. With a smug smile of satisfaction I entered the text and pressed “translate” and, hey presto!:

Have come from a team meile past a recent book your “In the steps of Master of the “name conflict, the English name” The two steps you Pu “. Has written a book tangta Beritane” The HV Morton “his name, in this book reveal the name of the stand and he books reveal the standing of the country and Canaan your Tairiiri.

Has his ways in the country and in his book he wrote the many things he saw his faith as a whole. Approached He Ierusalem to where Jesus’ birth, and Nazareth to the where we see many of the names in the Scriptures. He approached the fishing on Lake Galilee and found All he has to use all the fishing sites from coast humans Cook Islands stand, that is, they do the candle bar.

So, there we have it, as clear as mud. To be honest I think I had a better chance of understanding the original!

But even without being able to understand the full meaning of the text, it still gives a perspective on HVM’s immense appeal at the time and remains for me a fascinating piece of Mortoniana. It also provides a small snapshot of Morton’s life at a time of considerable change for him as, although the book containing the flyer is published by Methuen, the advertisment is for a book published by Rich and Cowan, to whom Morton had transferred his allegiance in 1933. They continued to publish his works until 1937 when they suffered bankruptcy, at which time Morton was persuaded to return to Methuen once more.

In the unlikely event that any readers are familiar with the Maori language I would be very grateful if anyone was able to cast any further light on this unique review. Not least because I would dearly love to know what it means to “do the candle bar” – it sounds like fun!

This article was originally distribued as HVM Literary Notes – No.127

Tagged as books, HV Morton, In the Steps of the Master, Maori, review, Travel