“Vignettes of Childhood and other poems” – a review

There is a slight departure from the subject of HV Morton in today’s post but one which, I hope you will agree, is very much in the spirit of the great man. 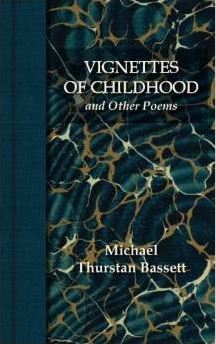 HV Morton Society member, Michael Thurstan Bassett is a man of many talents – poet, musician and artist. We have all enjoyed his work in the past as he has contributed several of his poems as society bulletins over the years, including this one, now available on the blog. So, you can imagine my delight when I heard he has just had a series of his poems published by Harvest Road Books of New Zealand, under the title “Vignettes of Childhood and other poems”.

When my copy arrived I was keen to see how his other works would compare with those I had already seen, and I wasn’t disappointed!

The anthology is in five sections with the first, Vignettes of Childhood, being a narrative of autobiographical accounts beginning with a small boy’s fascination with war and combat, irresistible when brought to his very doorstep during a childhood spent during World War II on the Isle of Wight. Mike was an eye-witness to the Battle of Britain and the later massing of the fleet prior to the D-day landings and these historical events are captured with evocative immediacy in Mike’s carefully chosen words. Then, from the immediate post-war years there are accounts of a period spent in post-war Germany with all the destruction and horrors witnessed there, before a blissful celebration of homecoming in Vignettes of Childhood V and the final, unfinished, leaving of the homeland for foreign shores. This section is a moving anthem to England and to times past. The final installment is set more than half a century after the first, as the author looks back, contemplating those “precious days”, yet ending with an optimistic note – although we seem forever destined to seek the unattainable, we will encounter beauty and grandeur on the way.

Mike is also a talented artist – dare one hope the second edition
of “Vignettes of Childhood…” might feature some of his
artwork, such as this one; an homage to Rembrandt.

Later sections, more philosophical in nature, deal with a number of elemental subjects – gods, dreams, love, homecomings and departures but most of all with the spirit of man which can, perhaps, be seen as the overarching theme of this volume. Mike’s style has a deceptive simplicity, making it very accessible (a bit like HVM!), but like all good writers, contained within it are hidden depths, to be found if the reader cares to look.

Several gems are particularly memorable. There is the touching symmetry of The Lesson of Life (which quite brought a tear to my eye!), the uplifting optimism, despite all that life throws at us, of Credo, and the hopefulness of Orphic Mysteries. We are treated to a little of Mike’s subtle wit with the gently provocative Lunar Landing, as he has a dig at the demystifying of the world around us in the name of progress, and Martha and Mary – a treatise on two of the most iconic women in the Bible, which has much to say about the world today.

Many of the verses in this excellent collection display a wistful longing which is dealt with most movingly – a yearning for home, and for a bygone age – but throughout this is tempered by a more upbeat, positive tone, as in this quote, from the poem, Life’s Tarnished Cup:

“For the healthy need no doctors,
And the happy need no priests:
Give man but power and freedom –
What need of sacred Feasts?”

All in all this is a highly recommended volume, just the sort of thing to relax with and contemplate, feet up infront of a blazing fire, glass of robust single malt in hand! And I’m looking forward to doing just that this Winter, as I read, once again, this trove of literary treasure from a modest man of great talent.

2 responses to ““Vignettes of Childhood and other poems” – a review”