‘In Search of H.V. Morton’, by Michael Bartholomew 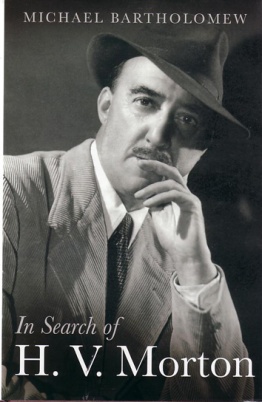 The first and most important thing to say about Michael Bartholomew’s “In Search of HV Morton” is that this is an excellent read. The text flows, it is accessible and, unlike some biographies, it has a good structure and narrative. The reader is taken from Morton’s childhood, cycling around the lanes of Warwickshire and discovering a passion for place and history through his journalistic career, finding his niche as the foremost travel writer of his time and then, finally his gradual disillusionment as England began to take a different direction from the country he had known and loved.

Early in the work Bartholemew takes time to explain the distinction between the droll, urbane narrator of his tales (‘HV’ Morton) and the real man (‘Harry’ Morton) behind the books. Morton’s contemporaneous diary writings are contrasted with his works of literature throughout as a device to move through Morton’s life and explore the motivation behind both narrator and author. Any reader coming to this work hoping to read about the simple, solitary, companionable traveller of Morton’s books is in for a disappointment. Like the top rate journalist he was, Morton knew how to deliver precisely what his audience wanted and went to great lengths to maintain the illusion and charm of his books by keeping a low public profile. Fortunately for us (and perhaps less so for the reputation of ‘HV’) Morton left a large number of notes in the form of diaries and half written memoirs which formed the basis for much of Batholomew’s book, enabling his story to be told.

This account of the life of Morton is even handed and largely non-judgemental (despite the occasional spin placed on some of Bartholemew’s words by other reviewers).

Bartholemew obviously admires Morton’s talents as a master of descriptive prose and he presents Morton’s questionable political views as more naive and simplistic rather than anything more sinister; ‘more prejudice than politics’. Morton’s womanising and racism are presented, mostly in the form of extracts from his diary, and the reader is left to judge for him or her self. We are told of a man who, while privately contemptuous of the direction Britain was taking at times, was prepared to put his talents to work, on occasion for no financial return, to support the governmnent in its efforts during the war. Morton wasn’t without a social conscience and his 1933 social commentary “What I saw in the slums” is compared favourably with the better known “Road to Wigan Pier” by George Orwell; Bartholomew suggests that Morton’s depiction of women in the slums is ‘just as powerful and… less patronising’ than Orwell’s. We are told of Morton’s quiet bravery – castigating himself in his diary on the one hand for his cowardly feelings during the London blitz yet, despite his fear, going into the city to cover stories for his paper. At a time in Britain’s history when invasion appears imminent Morton writes about the distinct possiblility of being killed defending his village against the Nazi foe while at the same time is enraged as his gardener is enlisted into the armed forces.

This book is a sympathetic, ‘warts and all’ portrayal of the real man behind the public persona; above all it is a balanced account. It is direct and unstinting, delivering praise and criticism alike where they are due. By the conclusion any Morton admirer will be the better for having read it and will have an understanding of the real depth behind both ‘HV’ and ‘Harry’.

3 responses to “‘In Search of H.V. Morton’, by Michael Bartholomew”