An HV Morton Society member from Warwickshire, England, wrote to me a couple of days ago to let me know about a television programme which mentions HV Morton and, especially since my wife had also spotted it, I thought I would spread the word!

The programme is Great British Car Journeys and stars Peter Davison and Christopher Timothy, two old actor friends and veterans of one of my favourite TV drama series, All Creatures Great and Small (the story of James Herriot as a young veterinary surgeon in the north of England).

Great British Car Journeys is broadcast in the UK by Channel Four Television and the second episode (the one in question) is an English road-trip, undertaken in Davison’s rather classy Morgan car, travelling from Central London to Land’s End in Cornwall on what used to be known as the Great South West Road or London Road, depending I imagine on which direction you were travelling but, since 1920, has been known rather more prosaically simply as the A30.

The two travellers stop, as Morton did, at the Warren Inn en route, at which point Peter Davison, who is seen clutching the Folio Society edition of “In Search of England“, reads the section from Morton’s work which refers to the legendary fire at the Warren Inn. This fire, when Morton was writing, had supposedly been lit contiuously for one hundred years. The present landlord told the same story, meaning the fire has now been lit continuously for nearly two hundred years. One can only wonder how they manage to sweep the chimney without serious burns! 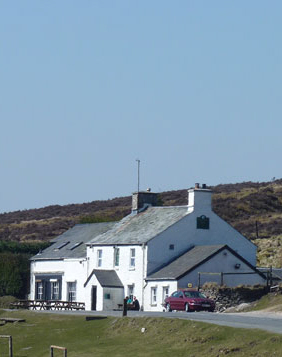 On their journey they manage to recreate (rather erratically) the first ever motor vehicle journey in England which took place in 1895 (three years after Morton’s birth!) and which was closely followed by the very first motoring offence as the new car immediately smashed the then national speed limit of 4 miles per hour! The viewer is also treated during the episode to many delightful photographs and videos of motoring in England in the 1920s and 30s which give a real impression of the sort of scenes that Morton must have witnessed while on the road as he travelled the length and breadth of Great Britain in the interwar years.

Information regarding the series can be found on the Internet Movie Data Base. The programme itself is available to watch online for the next few weeks, but I have a feeling this may only be available to UK residents.

This article was originally distributed as HVM Society Snippets – No.235 on the 14th February 2019

Filed under HV Morton in the media, Literature, Travel