This article was originally distributed as HVM Society Snippets – No.247, 8 December 2019 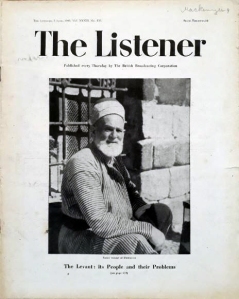 The BBC’s Listener magazine was published weekly from the 16th January 1929 and was described by the Guardian as one of the most distinguished publications in British journalism. It was intended to expand on the topics of various BBC broadcasts in a way that wasn’t possible in the programmes themselves or in the BBC’s listings magazine, the Radio Times. In its early days it was an eclectic publication which reflected the BBC’s cultural ideals but changes in society were mirrored by a change in editorial policy as ownership of the magazine was taken out of the BBC’s hands in the late 1980’s. As a result of this change and increasing competition the publication ceased production in 1991, after a total of 3,197 issues.

In the summer of 1945, shortly after Germany’s surrender at the end of the second world war in Europe, the 7th of June edition of The Listener was delivered to the MacKenzie household at number nine (price threepence). I have no idea who the MacKenzie family were or in which street number nine was but I am forever grateful to them as, nearly 65 years later, their extremely well preserved copy of volume 33, number 856, found its way to me in Glastonbury (price – a lot more than threepence), complete with their name and number written in pencil at the top right corner of the cover.

As if to illustrate how little some things have changed, the first article of this edition (on page 619) is entitled The Levant: its People and their Problems. Section one, The Place, is written by popular travel writer of the time and recognised authority on the region in question, HV Morton.

It is perhaps not one of HVM’s finest pieces of writing but nevertheless it is fascinating to see him simply as part of popular culture, someone who had done so much to bring the countries under discussion to the attention of readers in Britain and the US, commenting on the affairs of the day in the same way that others, including Stephen Fry and Ian Hislop, would do in later editions. Of course, Morton had recently also contributed to the allied war effort in the middle east and North Africa by publishing his condensed (“light enough to be carried in a haversack”) volume “Middle East” and later another similar paperback version, “Travels in Palestine and Syria” which was specifically intended for issue to the troops in that region. 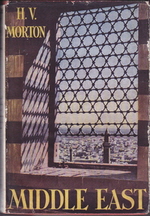 I have included the text below for your interest along with a few pictures and advertisments from the magazine which give a feel for the time it was written as well as adding to the enjoyment of looking back at history in this way!

SYRIA and Palestine are, geographically speaking, one. Syria is the north; Palestine is the south. They are much the same to look at; a thick central spine of barren mountains sloping away on the east to a vast desert and on the west to fertile plains washed by the waves of the Mediterranean Sea. Syria is much larger than Palestine (which is only a little narrow strip of a country), but the greater part of Syria is desert stretching eastwards for about two hundred miles to the Euphrates and Iraq. 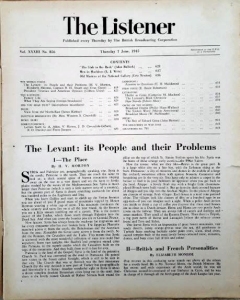 When you leave Galilee and start to climb up the Syrian frontier you see ahead of you a grand mass of mountains topped by Mount Hermon wearing a white cap of snow. This mountain dominates the whole country and snow lies on it all the year round. At the frontier you see a little stream tumbling out of a cavern. This is the eastern source of the Jordan, which flows south through Palestine into the Dead Sea. And when you cross the frontier you are in Colonial France.

Now history. Syria has always been the trackway for migrations and for every conqueror who has ever broken loose. The Egyptian Pharaohs marched across it from the south; the Babylonians and the Assyrians from the east; Alexander the Great came across it from the north. So did the Romans, the Crusaders and the Turks. This means that Syria is scattered with the most wonderful collection of ruins you could find anywhere, from vast temples like Baalbek and complete ruined cities like Palmyra, to the superb castles which the Crusaders built on the tops of the mountains. And they built them as if to last for ever.

Palestine is the land of the Gospel; Syria is the land of the primitive Church. St. Paul was converted on the road to Damascus. He gained new vision in the Street called Straight, which is still to be seen in that city. The Church that was at Antioch was the first missionary Church (by the way Antioch is now part of Turkey but geographically and historically it is Syria). Another wonderful sight in Syria is about a dozen complete desolate Byzantium cities lying out in the sand. And there is the lovely ruined Church of Kalaat Semain built round the pillar on the top of which St. Simon Stylites spent his life. Syria was the home of those strange early ascetics—the Pillar Saints.

Now the towns: what are they like—Beirut is the great port. It is a large white city on a fine bay, with the Lebanon rising at the back. Damascus: a city of minarets and domes in the middle of a large flat orchard, sometimes ablaze with apricot blossom. Commerce and bargaining are in the very air. You have only to admire a carpet in the bazaar to find it in your bedroom on approval when you get back to the hotel. Aleppo: a lovely Arab city with a bright little chromium-plated French town built round it. But go into the dark covered bazaars of Aleppo and you slip into the Arabian Nights. In the plain of Aleppo are clusters of strange Arab villages. Each house is a mud cone painted white. The villages look like clusters of fifty or a hundred eggs in an egg-rack—if you can imagine such a sight. When a polite Arab invites you inside to drink a cup of coffee you discover that these mud houses are as clean as a Dutch dresser. Homs and Hama are two purely Arab towns on the railway. They are always full of camels and donkeys and street markets. They smell of the Eastern Desert. Then there is Tripoli, a big port north of Beirut and Lattaqieh (where the tobacco comes from) and Tyre and Sidon.