Judging a book by its cover

“Middle East” – a challenging example of photogravure
(or so I am reliably informed!), before and after restoration.

Over a year ago, during one of my HV Morton internet trawls I stumbled across a website called “Reprojackets” which immediately grabbed my attention, as I was whisked, courtesy of google, to their HV Morton section.

I discovered the website offered high quality reproductions of classic book jackets. At the time, in the gallery, there were two HV Morton jackets – C W Bacon’s 1964 “A Traveller in Italy” and Fred E Taylor’s jacket for the eariest editions of “In Search of England” – both of which amazed me. I have always loved much of the artwork associated with HVM’s publications, and the idea of having them restored and refreshed to their original vibrancy quite took my breath away (you can tell I don’t get out much!). 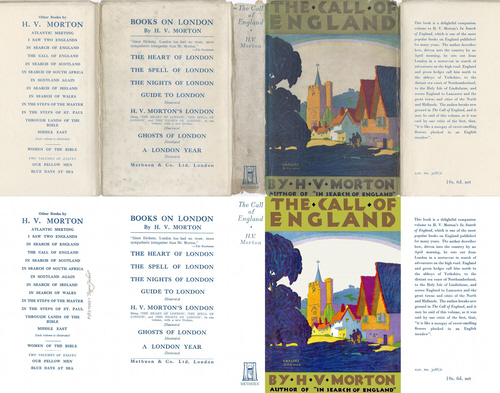 Gregory Brown’s “railway-poster”-style cover to “The Call of England”
– now restored to its original vibrancy.

I decided I would like to have one for myself and, after prizing up the loose floorboard under my bed, I was in the process of dusting off my wallet and wondering whether groats were still legal tender when, to my surprise, I received an email from John Whythe, the proprietor of the Reprojackets website himself!

John, it turns out, is a very pleasant and learnéd man who hails from Abergavenny, in Wales. The reason he had got in touch was regarding his recent purchase of a very early copy of “In Search of England” which he suspected was something special. I was able to help by putting him in touch with Peter Devenish and Kenneth Fields and it was quickly confirmed that John had in fact bagged that holy of holies, a first edition “In Search of England”. After that, our correspondence continued and, on realising my interest in his project, John enlisted me as a willing recruit, to help by scanning some HVM jackets for him. This was a bit of an experiment as up to that point he had done all the scanning himself, from his own copies.

Since then I have sent John a steady trickle of scanned jackets – enormous, highly detailed 600dpi TIFF pictures – and have watched in amazement as he has restored them to the condition they were in when new, whole layers of colour and detail, previously obscured, are revealed – and his gallery has expanded.

John has an real eye for detail as he painstakingly strips the digital image of each jacket down to its component shapes and colours and then carefully builds them back up again anew after patching and repairing any defects caused by the passing of years. The final touch is to add a Reprojackets identifier logo – unobtrusive but unmissable – to ensure there is no confusion between copy and original. John has been kind enough to send me a couple of examples of his finished work; they are quite exquisite and I intend to frame them.

You can see the process in action as John has presented a restoration sequence on his website here, and an animation here.

John is also very knowledgeable in all things bibliographic and has educated me on such things as the difference between a “printing” and an “edition” and also on various types of fonts – it was he who supplied the information about the unusual ligatures in the Caslon font employed in some of HVM’s early works (see HVM Literary Notes – No.124).

So, if you have a spare moment, I would urge you to hop along and have a look at John Whythe’s meticulous and sympathetic restorations of, not just Morton’s works, but those of other authors too, from Hugh Lofting to PG Wodehouse and Arthur Ransome to JRR Tolkien.

The artwork for me is a significant part of the “Morton experience”, if you will, and it is a delight to be able to view it in something like the condition it must have been when it first appeared on book sellers’ shelves in the 1920’s and 30’s. I have several covers ready “in the pipeline” ready to send to John, including the “Scotland…” covers; AE Cox’s series for Morton’s middle east travelogues and “Our Fellow Men“; and the minimalist “Land of the Vikings” – and I’m greatly looking forward to seeing resored them to their original glory in future projects.