The secret portrait of Prince Charlie

In chapter eight of “In Search of Scotland” HV Morton takes his leave of Inverness to travel south-west, following the path of the Caledonian Canal, that majestic marriage of geology and human endeavour. He is en route to visit two towns whose names ring out like a clash of steel down the centuries from a most turbulent and bloody period of Scottish history – Fort Augustus and Fort William.

After spending a night of Jacobite revelry in Fort Augustus, his journey continues through what he describes as the “real” Highlands. “The heather” he writes, “was like spilt claret on the high, smooth slopes of the hills; the thick woods were stained with autumnal colour; there was a flash of lake water between the trees and the splash of mountain streams falling from the heights.” 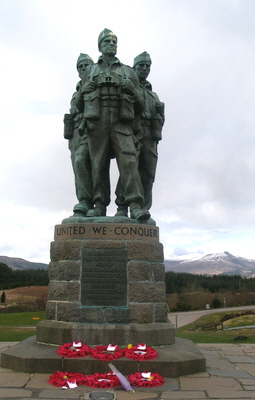 Finally, passing Spean Bridge (where now stands the Commando Memorial), Morton arrives at his destination, a settlement referred to, in their native tongue by the Highland Clans it was built to impress, simply as An Gearasdan – The Garrison.

“Fort William crouches, with an air of pretending to be the end of the world at the foot of Ben Nevis, the highest and most famous mountain in the British Isles…”

Sadly, the original garrison has been completely obliterated by a now disused aluminium smelting plant.

Morton makes the traditional pilgramage from the town, up Glen Nevis and finally up all 4,406 feet of the Ben itself, wearing town shoes which gradually disintegrate as his climb continues. Finally he returns to share the tale of his trek with fellow veterans of the hike, ensuring instant popularity by comparing Ben Nevis favourably to the Swiss Alps, the Libyan Hills of Egypt and the Aures Mountains in Africa.

The following day Morton sensibly decides to spend a quiet day in town – presumably after having bought some more shoes! His account of his visit to the West Highland Museum fascinated me so, when I was in Fort William with the family a few years ago, I made a point of visiting it. 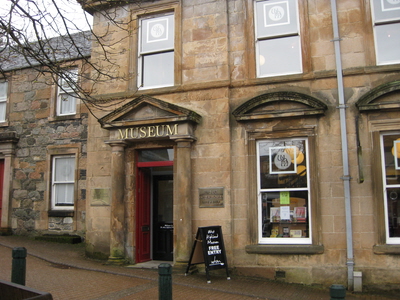 “The little West Highland Museum” as HVM describes it

Morton describes in some detail one of the highlights of the visit for me, the secret portrait of Prince Charlie. The “portrait”, from a period when allegiance to the Stuart cause was punishable by a quick death (if you were lucky), is painted on a wooden board which, according to the notes by the display cabinet, was further disguised by being used as a casual tray for drinks. Morton describes it as being “… daubed with paint in a half circle. It looks like the palette of a rather careless painter”.

The painting is housed in a glass cabinet up some very creaky stairs on the first floor of the museum, and is unrecognisable as a picture, just as Morton reports, until it is viewed with a special cylindrical mirror made especially for the purpose and placed at the correct point on the board. It is not at all easy to get the correct angle and focus, but with patience finally the tiny picture can be seen by viewing the ‘blob’ as it is reflected in the mirror. With even more patience the Young Chevalier, in all his glory, can be photographed. 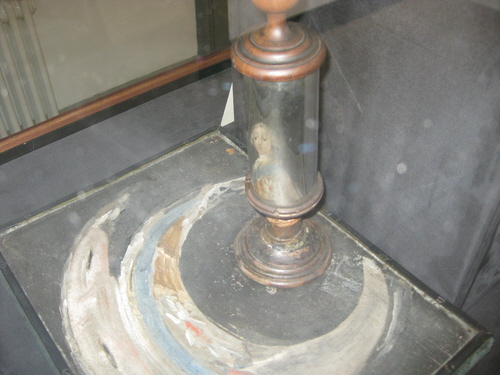 One can just imagine the tray being brough forth during clandestine gatherings and, as HVM writes, “… you call to mind oak-panelled dining rooms and candles lit, a warm glow over family portraits, a guard over the door, and the company rising to lift their glasses to the cause that was fated to be lost”.

This post was originally circulated as HVM Society Snippets – No.183 on 9 May 2015

2 responses to “The secret portrait of Prince Charlie”