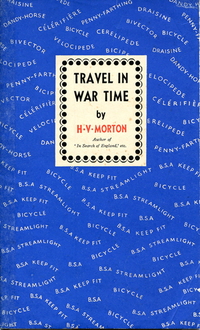 Apparently there is a sporting event being held somewhere, in which British cyclists have been doing quite well. Gripping as the saturation coverage is, during discussions about the finer points of the Omnium and particularly when anyone attempts to explain the rules of the Points Race to me, I find my thoughts drifting, inexplicably, to things Mortonian.

HVM was a keen cyclist in his youth, frequently taking to the lanes and exploring the countryside near his boyhood home, in the halcyon days before the Great War. He is of course more famously known for his motoring trips between the wars around Great Britain in the seat of his little blue Bullnose Morris car which, in a whimsical moment, he named Maud. But his travels, and those of others motoring for pleasure were severely curtailed with the advent of the Second World War and the introduction of petrol rationing. It’s an ill wind that blows nobody any good as the saying goes though, and the restrictions on motor travel were a boon to riders and manufacturers of the humble bicycle, who were able to take advantage of the now virtually clear roads.

In 1940 or thereabouts the Birmingham Small Arms company, which manufactured bicycles as well as sporting guns, began to publish an advertorial-type brochure called “Travel in War Time” and to give it away free when people wrote to them for their latest catalogue featuring the “Streamlight” range of bicycles.

As you can see from the image above, the author was HV Morton; as they say in the introduction, BSA hoped it “might be regarded as an entirely new chapter in his brilliant series ‘In Search of England‘ etc.“. The fact it might also help boost sales would be an added bonus of course.

The pamphlets, each comprising twenty pages and some 2,200 words, must have been produced in their thousands but they had soft-covers, held together with a single, large stitch at the binding fold and sadly, very few have survived. Thus they are one of the more collectible pieces of Mortoniana which can be found.

There is inevitably an element of Morton having to make a virtue out of necessity in his writing as he puts on a brave face and makes a show of bemoaning people who, in the days before petrol rationing would travel carelessly – “They would think nothing of ‘getting out the car’ and speeding for fifty miles in order to eat a bad dinner in some remote place, when they could have had a good one by remaining where they were.”  You can almost hear the gritted teeth as he writes, “It was all part of the tendency, which seems bent on leading the world back to barbarism, of allowing the machine to control us, instead of controlling the machine ourselves.“

Two happy cyclists take tea in what looks
like the village of Dunster, in Somerset

As he endeavours to present petrol rationing and wartime restrictions as, not a hardship, but a welcome relief from the dangerous and reckless days of the motor-car – “the emptiness of the roads, and the fact that life goes on very much the same as usual, is a measure of the unnecessary movement which was so characteristic of the nineteen-twenties and ’thirties” – there are hints he may actually have derived a degree of genuine, nostalgic pleasure from his first time in the saddle for twenty years. “I never imagined that once again a bicycle would be my treasured and constant companion, as in those days of youth, when it was always summer” we are told. At times he seems to have been positively reinvigorated, “Of the thrill of free-wheeling down a hill, I could write much, but perhaps the most I can say is that at such a moment twenty years slide from a man’s shoulders as if they had never been. In that splendid flight a man feels absurdly young again…“. Clearly with a bicycle in the garden shed there was no need for a fountain of youth!

And, being the writer he was, Morton leaves us with an uplifting closing paragraph, patriotically weaving the humble bicycle into the deep fabric and culture of Britain itself, and hinting at what might be lost if things don’t go well in the years to come, as he describes how those machines which are to be seen “… leaning against a churchyard wall or propped outside a village inn, tell of a love for good and honest things. They suggest freedom and simplicity, two precious things, and they suggest also that those who travel on wheels desire to understand the story of our own beloved and ancient land.“

How long HVM continued to travel by bicycle once hostilities had ceased (or, indeed, once he had written the pamphlet) I cannot say, but this small booklet is a delight which captures the feeling of the age of “make do and mend“. And, as a bonus, there isn’t a single mention of lycra or the latest athlete to have “podiumed” (eugh!) to be found between its covers – enjoy the rest of the Olympics!

This post was originally circulated as HVM Society Snippets – No.207

2 responses to “Travel in War Time”