Tut-ankh-amen’s Gold: Into the Land of Egypt

I hope you will forgive me when I say I am feeling a little pleased with myself at the moment. I have just managed to acquire one of the rarest examples of Mortoniana there is!

A large booklet in heavy-weight paper, its silvery front page bears the title ‘EGYPT‘, written in blue letters which are shaped from stylised papyrus bundles. The cover is enclosed between protective transparent sheets of blue plastic and the whole thing bound with spiral wire. It measures approximately 315 mm (12.5 inches) in height by 235 mm (9.5 inches) in width and comprises 31 unnumbered pages. From the style and content, it appears to be aimed at attracting tourists to that ancient land, particularly American, English and French tourists. 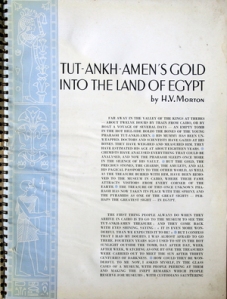 The first section is an introductory article by HV Morton entitled Tut-ankh-amen’s Gold: Into the Land of Egypt. This is laid out on four pages, each decorated on one margin with depictions of the art and heiroglyphs of Ancient Egypt in blue. The text is very similar to sections on pages 55 to 57 of Morton’s book “Middle East” (published by Methuen, London, on 5 June 1941).

Unfortunately, just to temper my joy, my newly acquired copy has obviously got a little damp at some point in the past – the metal binding has rusted and, most frustratingly, the pages of Morton’s article have stuck together in places and when pulled apart again some of the text has been lost.

However, nothing is too much trouble for the HVM Society so, looking for all the world like extreme archaeologist, Indiana Jones, (only without his rugged good looks and Hollywood lifestyle), I held the pages up to a strong light source and managed to peer through them, despite their thickness, in order to get an idea what the missing sections originally said. Eventually I was able to make a transcript of the piece for the archives.

I haven’t been able to find much about the poet, google is unusually tight-lipped about him. And, although I am no judge of poetry, the reason for this may be, at least from the examples published here, that he is no Shakespeare, in truth he may barely even be a McGonagall I’m afraid. Here’s an example:

The swiftly running river,
Moonbeams a-quiver
Within the trees

A white form, gowned and slender,
Eyes dark and tender,
And lips that please…

Drawing a (mystic) veil over this dodgy doggerel, the next section is a page of prose by a Claire Cowell (again, nothing seems to be available on the internet to suggest who Ms Cowell may have been), eulogizing the wonders of Ancient Egypt. 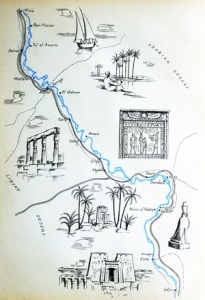 After this we have three illustrated maps depicting the course of the river Nile and the principal transport routes from Wady (now spelled Wadi) Halfa north, through Abu Simbel, Assuan, Thebes and Luxor to Cairo and the Nile Delta.

After a single page left blank for notes by the traveller the whole work is rounded off with a page of information for the benefit of the visitor: a list of routes by which to journey to Egypt, as well as exchange rates, hotels, taxis, hints concerning clothing considered suitable for the climate and a list of spots likely to be enjoyed by the tourist.

The booklet was designed and printed by Editions Mayeux, Paris and bound by Reliure Integrale Bree France et Etranger. In the opening article Morton mentions his witnessing of the opening of Tutankhamen’s tomb fourteen years previously so, since he was sending despatches from the tomb-site to the Daily Express in February 1923, presumably the booklet was published around 1937, although no specific date is given on the booklet itself. Morton presented a number of on-board lectures for the Hellenic Travel Club from 1935 to 1939 on cruises to the Middle East and it is possible the booklet is associated with one of the tours.

(This article was originaly distibuted as HVM Society Snippets – No.215)

2 responses to “Tut-ankh-amen’s Gold: Into the Land of Egypt”